The Story of Apache Pinot

Among the services LinkedIn presented to customers was a simple query: “Who Viewed My Profile”. Initially able to present only aggregate views over fixed periods of time, the feature wasn't very popular and generated only 10s of queries per second. But once LinkedIn expanded the query with detailed insights — i.e., views by company, geo, title, etc. — the growth and engagement of LinkedIn’s user base began to take off, and the organization realized they would need a fundamentally different approach to processing data — a new technology capable of handling unprecedented scale. That was the spark for Pinot.

Success is a Problem?

As engagement shot up, 10s of queries per second jumped to 1000s. To maintain the SLA for “Who Viewed My Profile”, the product team added hundreds of nodes to the cluster, and struggled constantly to manage it. Even so, query latency and resource consumption were trending the wrong way. It soon became obvious that LinkedIn’s existing analytics stack and cluster management system could not keep up with demand.

Rethinking all the Steps

To solve the bottlenecks, the Pinot team sought to evolve the existing search-based system for the needs of real-time analytics. In looking for a new solution, they had a key insight: instead of working to accelerate an existing, tightly-coupled query protocol, they would gain efficiency and save compute time by looking for stages in the query process that might be avoided altogether. The resulting leap forward was Pinot’s flexible, on-the-fly, per-query approach to assembling the query process itself.

Pinot’s success is reflected in its spectacular efficiency gains. Recall that in 2014, with north of 200M members, LinkedIn was struggling to handle the explosive growth of the “Who Viewed My Profile” product. Supporting that single query without Pinot eventually required a 1000 node system, with all its attendant costs and management overhead. By 2020, LinkedIn had grown to 700M+ members, with the “Who Viewed My Profile” product alone generating 5000 queries per second. But with Pinot, LinkedIn handles this query load with only 75 nodes — a 45x improvement in efficiency despite a massive increase in the user base. 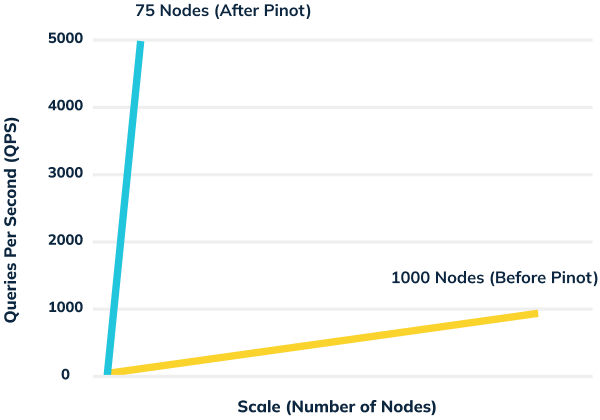 Despite breakneck growth for the “Who Viewed My Profile” product, query performance in 2020 featured:

Today, LinkedIn leverages Pinot across the organization to support a total of 200K queries per second and 70+ products, many of which are user-facing and thus subject to strict SLAs around latency and throughput. In addition, Pinot serves as LinkedIn’s own repository for nearly 10,000 business metrics queryable across 50,000 dimensions.

Comprehensive instructions and in-depth use cases