Apache Pinot® is a blazingly fast OLAP system. One of the many reasons why Apache Pinot is so fast is its highly-optimized query execution engine. However, this query execution engine follows a single-stage scatter-gather model, which poses some limitations in supporting complex multi-stage queries, such as distributed joins and window operations. As the popularity of Apache Pinot grew over the past few years, there have been a growing number of requests from the community to handle these complex queries in Pinot.

Today, we are excited to introduce a new feature preview for Apache Pinot - the multi-stage query execution engine! This new query engine enables us to support distributed joins, windowing, and other multi-stage operators in real time.

Apache Pinot has a distributed architecture that consists of the following components:

You can learn more about the architecture and components in the documentation.

When the Pinot broker receives a query, it gets distributed directly to Pinot servers that host the segment data. Each such server then executes the query locally. Finally, the broker merges the results from all servers. For typical analytical queries such as high-selectivity filters and low-cardinality aggregations, this is a very efficient process. However, for queries that require data shuffling, such as join operations, a lot of the computation needs to be performed on the Pinot broker, effectively making it the bottleneck. 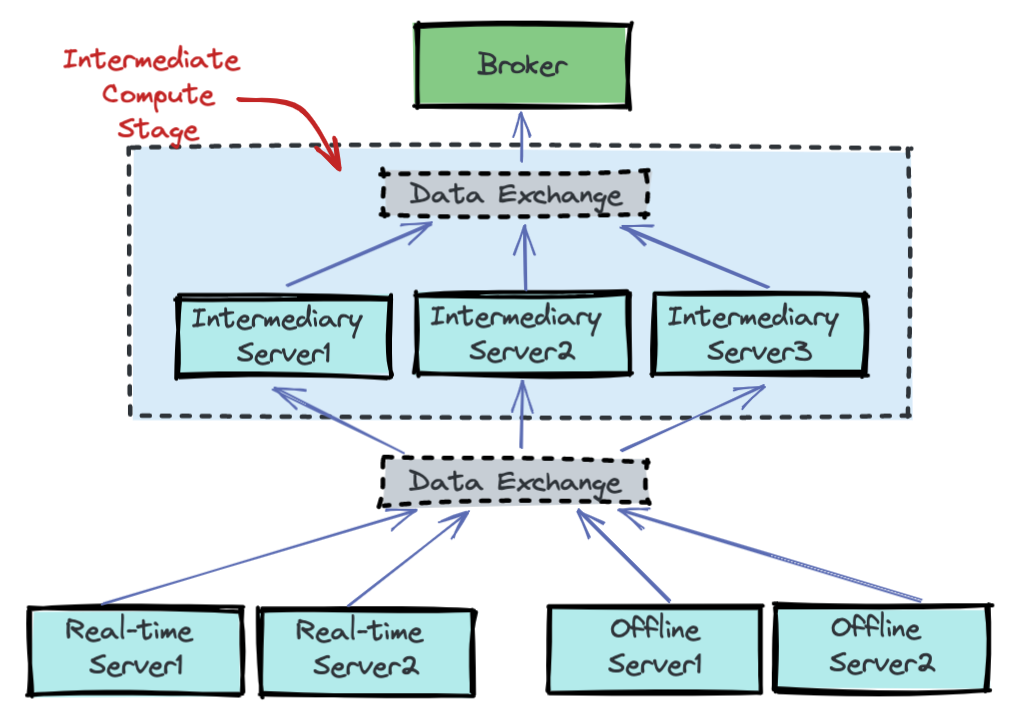 The new multi-stage execution model is designed to address the bottleneck mentioned above.

With the new multi-stage query execution model, we also introduced a new query plan optimizer to produce the optimal process logic on each stage and to minimize data shuffling overhead. We will dive into the details in the “Implementation Challenges” section.

With a multi-stage query engine, Pinot first needs to break down the single scatter-gather query plan into multiple query sub-plans that run across different sets of servers. We call these sub-plans “stage plans” and thus each execution is called a “stage.”

Let’s use a distributed JOIN query example to illustrate the breakdown of a query into stages. Consider the following join query where you want to join a real-time orderStatus table with an offline customer table:

Once the query is received by the multi-stage query engine broker, it will be broken down into three stages, each with its sub-plan SQL as follows: 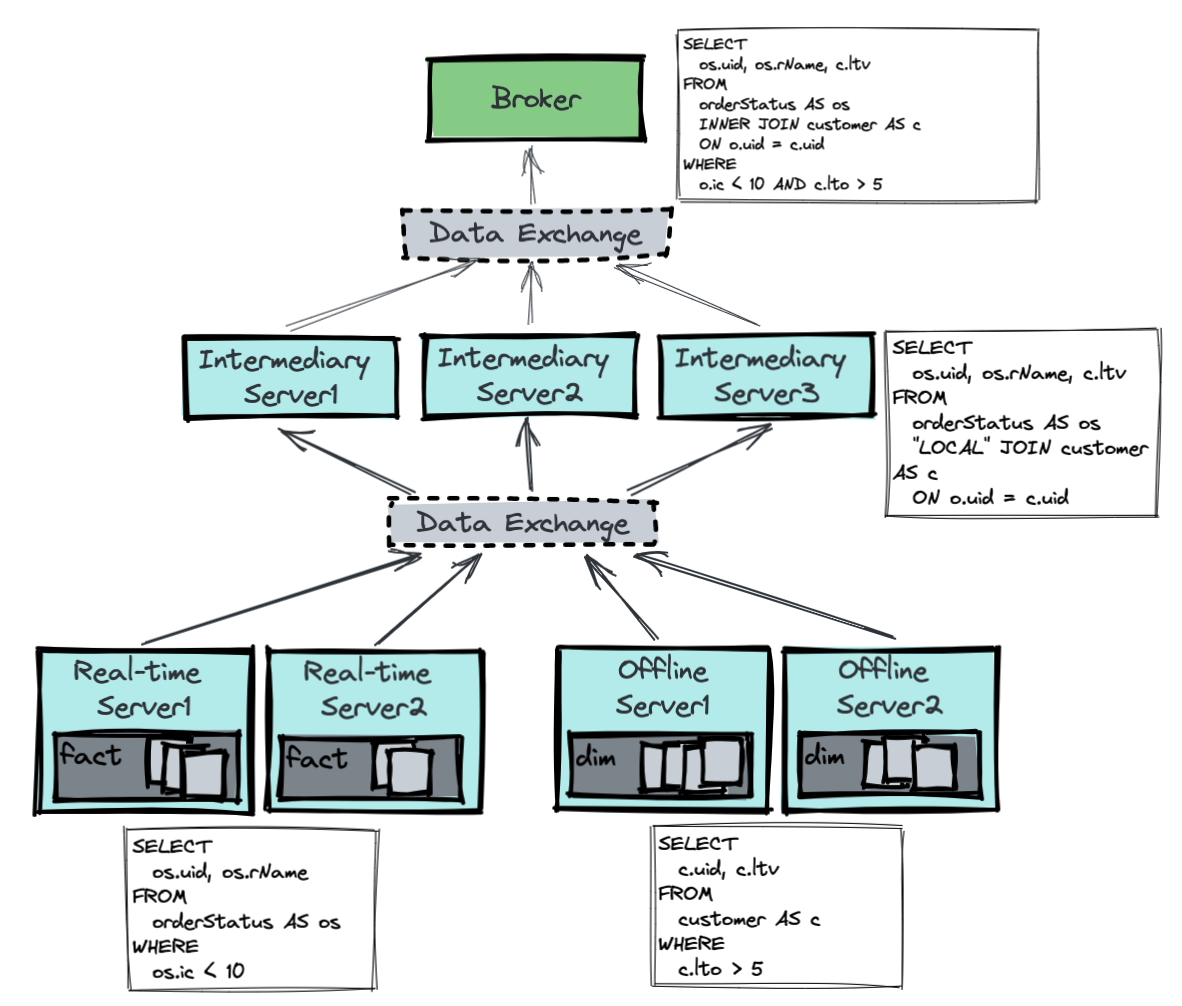 In the first stage,

The data exchange service is responsible for doing a data shuffle, such that all data with the same unique customer ID will get funneled into the same processing server for the next stage.

Let’s visualize the process in the image below. For simplicity, let’s assume there are only three unique customers (1, 2, 3) on the partition uid column in both tables and each uid is assigned to one of the three intermediate servers.

Now that proper data shuffling has been done in stage 1, an inner join can be performed locally on each processing server for stage 2. Let’s visualize the process in the image below:

Finally, in the third stage, after the join algorithm completes, the results are sent back to the broker and then served to the end-users. This stage is identical to the current Pinot broker behavior.

With the data exchange service and intermediary servers, we successfully unlocked multi-stage queries for Apache Pinot. However, with this, the end-user latency now includes not only the query execution time but also the data exchange time and query planner time. We were determined to ensure that the multi-stage queries also run with low latency and can be used in real-time, user-facing analytical applications.

As described above, one of our challenges was to ensure that our data exchange mechanism is very fast. To tackle this, we introduced a long-lasting GRPC channel between each pair of communicating servers, as the backbone of the data exchange service. The channels are managed by a “mailbox service” within the communicating servers. The mailbox service works very similarly to your local post office: 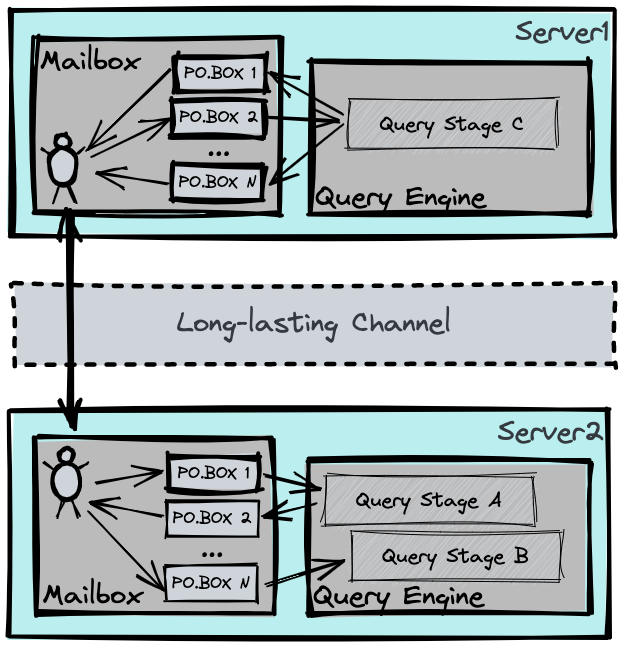 For the multi-stage query engine, sending/receiving data is simply using a PO.BOX in the local post office, thus decoupling the data exchange layer and the query engine layer.

In a traditional query planner setup, all metadata such as distributed table statistics, data distribution, etc. are transferred to a central planner for execution. This setup works well in long-running query engines. However, we decided against following a similar approach in Pinot, because the network round-trip overhead would add an unacceptable amount of latency to the query.

Here, we made a trade-off by deciding to run a two-step planner:

The new multi-stage query engine enables Pinot to run complex SQL queries that were never possible before while still retaining Pinot’s blazing fast query execution performance. As of today, this new engine is still in the beta phase. But it already unlocks the following:

It is available for trial as part of an early release feature branch. Please follow the instruction on this PR to try it yourself on local environment.

We are also expanding support to a list of advanced features. To name a few:

We’d love to hear from you

Here are some ways to get in touch with us!

You can get in touch with StarTree by contacting us through our website. We encourage you to Book a Demo or contact us for a free trial.

New to Apache Pinot? Here are some great resources to help you get started. You can find our documentation here, join our community Slack channel, or engage with us on Twitter at StarTree and ApachePinot.